What Does It Take to Build Team Synergy? It’s well documented throughout the sports world how important teamwork is to success, and how detrimental a lack of it can be. Look no further than the World Series Champion Boston Red Sox for an example of the former; the synergy displayed by this team transcended any talent deficiencies and left them holding the big trophy. As for the latter, consider what’s happening to the Miami Dolphins, where an apparent culture of over-the-top bullying led to one player leaving, one player being suspended and fallout that likely played a part in the team’s loss on Monday Night Football to an opponent that was 0-8 coming into the game.

What can business leaders learn from this? Quite a bit, starting from the importance of creating synergy, the interaction of multiple elements to produce an effect different from or greater than the sum of individuals’ efforts. As a leader, even if you consider yourself to be a superlative problem-solver (the best at your organization), a collaborating team is likely to outperform you.

A Harvard Business Review Management Update points to two key implications for leaders with respect to creating synergy when it comes to problem solving:

Thinking about teamwork in a more general sense, how you build your team and encourage members’ growth are two other things that will either lead to synergy…or not. You must choose the right people, utilizing their strengths to the fullest extent, and create an environment that fosters their development.

With respect to organizational structure, researchers and practitioners have identified six factors that lead to a great team workplace:

A good question to ask yourself is how you want your team to be reflected in the eyes of others. It seems probable that you want emulate the Red Sox’s example of game-changing synergy rather than dealing with the issues that seem to be ruining the Dolphins’ season. 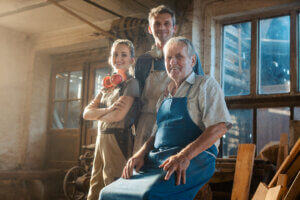