Does Gender Matter in Business Leadership? Yes – and No. As a family business planning consultant, leadership development and performance coach, and woman, I’m often asked whether gender matters when it comes to leadership. It’s a hot-button political issue, a question that requires nuanced thinking, and a subject that is coming into more prominence as the number of women executives in the workplace continues to grow. The answer to the question, however, is far from black and white. Seemingly everyone you talk to has an opinion on the topic, so let me offer mine: Yes, gender does matter in leadership positions – and no, it doesn’t. Are we clear? No? Let me explain.

Yes, there are differences between the sexes – biological, psychological, nurture, nature, etc. The main differences that come into play in leadership roles for women are style and emotional tendencies. There are no differences – and this is supported by research but really should be self-evident – between men and women when it comes to ability in leadership positions. But style and emotional profile do matter and can be both positive and negative.

On average, women tend to be more democratic/participative in their leadership styles, while men tend to be more autocratic and directive. Research has also shown that women are more likely to show transformational leadership (being a role model) and to give rewards.  Men were more likely to exhibit the punishment element of transactional leadership, as well as a laissez-faire style (neglect of responsibility). To be clear, these tendencies are just that – tendencies. I’ve worked with plenty of men and plenty of women whose leadership styles are more in line with the tendencies of the opposite sex. Everyone is different.

So, what does this all mean? It depends.

Successful leadership has a lot to do with style – but different styles work better in different situations. I work with a lot of family businesses, and my experience with family business is that women who exhibit the traits of democratic and transformative leadership tend to be very successful. However, in the corporate world, things can be a bit different. Though we’ve come a long way as a society where equality is concerned, there is much work to do. In some corporate settings in order for women to get ahead, it’s often necessary for them to lead with a more traditionally “male” style that is marked by singular decision making and a more hierarchical approach.

I work with plenty of women leaders, however, who don’t adhere to a traditional female approach and have a stronger “voice” and style. Unfortunately, they tend to receive negative feedback and face more resistance as they attempt to work their way up the proverbial ladder.  Despite this, I have found in my leadership coaching work that regardless of gender, some essential skills are universal.

Gender does matter, but whether it’s an advantage or disadvantage really depends on the environment. Some situations call for more “female” tendencies and some call for more “male” tendencies.  I focus on guiding executives to understand how the nuances of the culture of their organization impact behavioral expectations of themselves and others.

Knowing your own situation – and adapting your leadership style to it – is the true key to success. 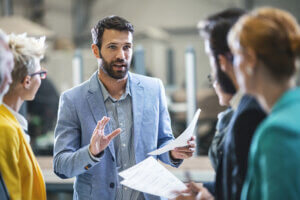